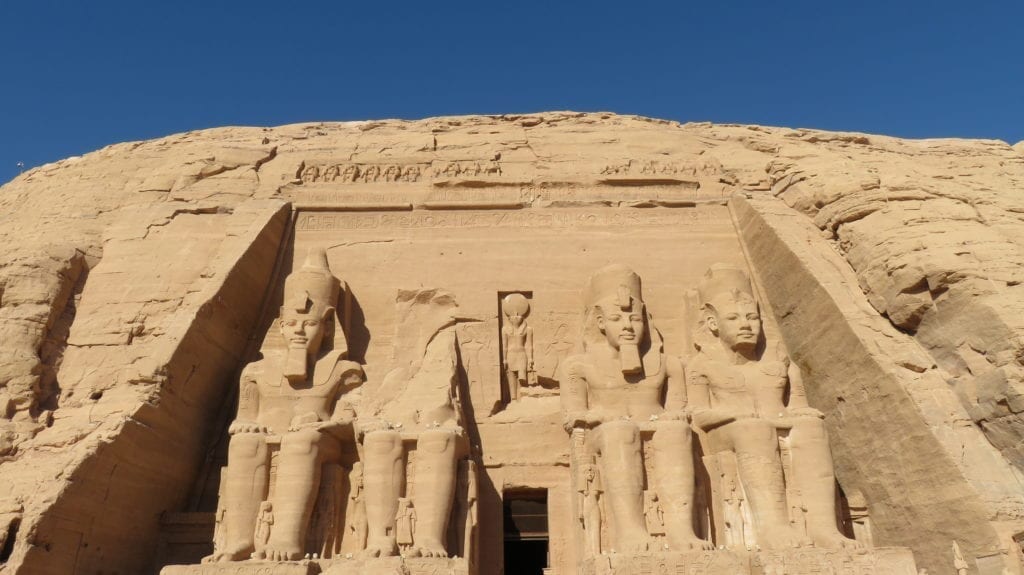 Have you ever stood somewhere and wondered how in the world did they do this?. If not, you will when you are in Egypt.  And in Egypt, even the experts are still wondering exactly; how Ancient Egyptians did these structures. For me, the beginning of those questions began at Abu Simbel Temples. Most tourists visit and tour Abu Simbel Temples from Aswan.

Abu Simbel is located about 20 miles north of the Egypt/Sudan border and located in the Aswan governorate.  In ancient times the site of Abu Simbel was the southern border of the pharaonic Egypt and faced Nubia. The purpose of the temples was manifold.  They built the larger temple to honor Ramses II and dedicated it to the sun gods Amun-Re and Re-Horakhte. On the outside of the temple, there are four 66-foot statues of Ramses II.  Surrounding his feet are small figures that represent Nefertari, his children, and his mother. Abu Simbel Temples are now a must see, tour and visit in Egypt.

North of the main temple is a smaller temple dedicated to Ramses II’s favorite wife Nefertari.  They dedicated the smaller temple to the goddess of Hathor. It displays 35 foot tall statues of the king and queen. Ramses II was a great showman. He likely built these temples to show his strength to the Hittites. Ramses II and the Hittites battled in a large chariot race at Kadesh. Although Ramses claimed victory (especially as depicted on his temples), the actual battle was deemed inconclusive. Nevertheless, Ramses II was able to put his wealth and power on display. Ramses II will have many pieces on display in the New Grand Egyptian Museum (the GEM) opening early 2021.

How many times the sun illuminates King Ramses’ statue at Abu Simbel Temple? The Sun Illuminates 3 of the 4 statues twice a year, amazing!

I have two favorite things about Abu Simbel.  One includes the sacred sanctuary at the back of the temple.  The Egyptians built the temple, so twice a year the sun will illuminate three of the four statues deep in the sanctuary.  The three illuminated statues are those of Amun-Re, Re-Horakhte, and Ramses II. The fourth statue is of the god Ptah, the god of the Egyptian underworld, and remains in darkness.  The dates of this illumination are February 22 (Ramses’ birthday) and October 22 (the day they celebrated his coronation). Awesome!

How Abu Simbel Temple was moved to its current location?

My second most favorite thing about Abu Simbel is how they moved the entire temple complex.  That’s right–they moved it. Egypt was beginning construction on the Aswan High Dam, and this was going to put the temples under water. As for Abu Simbel, the process took from 1964 until 1968 to complete the construction.  At the time it cost around $40 million USD which converts to a total of over $300 million USD today. In all honesty, the undertaking was incredible. If you are as intrigued as me, you might enjoy this video.  It not only shows how they moved Abu Simbel, but it also shows how they moved others like; Amada, the oldest temple, and Philae Temple.  Seriously, I still can’t believe it happened!

EGYPT FOR AMERICANS includes the tour from Aswan to the beautiful Abu Simbel Temples in most of their tour packages.

Posted in Egypt, Egypt & Beyond, Get Inspired, Must See In Egypt and tagged Abu Simbel Temples, Egypt, Egypt For Americans, Egypt Tours, Egypt Tours For Americans, Must See In Egypt, MUST VISIT IN EGYPT
← The Ancient EGYPTIAN SCARAB BEETLE | Scary? Sacred? Lucky? |Walk like an Egyptian around the Scarab statue in Karnak Temples | Luxor | EgyptSERAPEUM OF SAQQARA | Unsolved Mystery of Ancient Egypt →