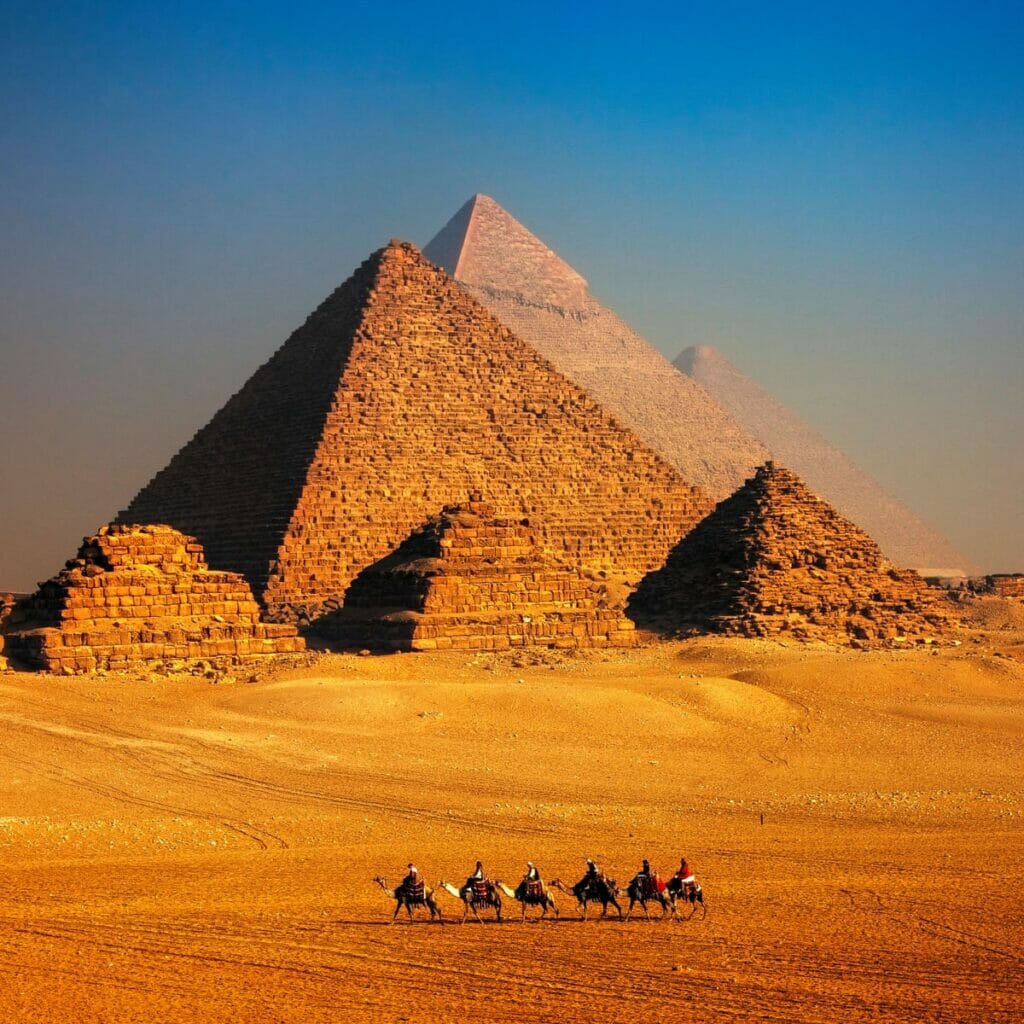 When people think of Egypt, they usually think about the Egyptian Pyramids.  And, when they think about pyramids, they usually think about the Great Pyramids of Giza.  However, these pyramids were not the first to be constructed. To find that pyramid, we have to go back even further to the time of the vizier Imhotep and his king Djoser.  Before Djoser’s reign, kings were buried into mastabas. Imhotep, however, had other ideas. He wanted to create a mastaba of greater proportions–one with stone mastabas that would stack on top of each other.  This idea led to the creation of the Step Pyramid at Saqqara.

The Bent and Red Pyramids

With this, inspiration was born.  King Sneferu, the successor to Djoser, wanted to improve upon the Step Pyramid idea, so he began his own experiments.  His first try, the Collapsed Pyramid at Meidum failed because, well, it collapsed. He tried again. This time, he got closer, but due to incorrect calculations, his second attempt became the Bent Pyramid.  Finally, the third time was the charm as Sneferu built his third pyramid–The Red Pyramid. It is still standing today in Dashur.

This desire to create Egyptian pyramids spread, and Sneferu’s son Khufu continued on the quest.  Khufu’s nephew, Hemiunu, was his vizier, and he got the credit for designing the Great Pyramid.  In the Giza complex, Khufu’s pyramid is the largest (believed to have been 480.6 feet tall) and is wonderfully aligned to the cardinal directions.  It is believed this pyramid was not only built by skilled workers but was constructed in a mere 20 years. That is astounding when you think of the 2,300,000 stones it took to build the temple…stones placed without modern machinery.

The Egyptian Pyramids building didn’t end there, however.  After Khufu died, his son Khafre decided to build his own pyramid next to his father’s.  Khafre’s pyramid, believed to be 471 feet tall, was not his only piece of construction, as he also added the Great Sphinx of Giza.  The third pyramid constructed came from Menkaure, Khafre’s son. It was the smallest of the pharaoh pyramids at an original height of 215 feet.

As you look at this complex, it is difficult not to wonder how these structures were built.  For one thing, the stones used were an average of 2.5 tons. Some people have said ramps were used to build the Pyramids.  Others say the Nile’s water table helped to raise the stones during the floods, but the only real answer is we still don’t know.