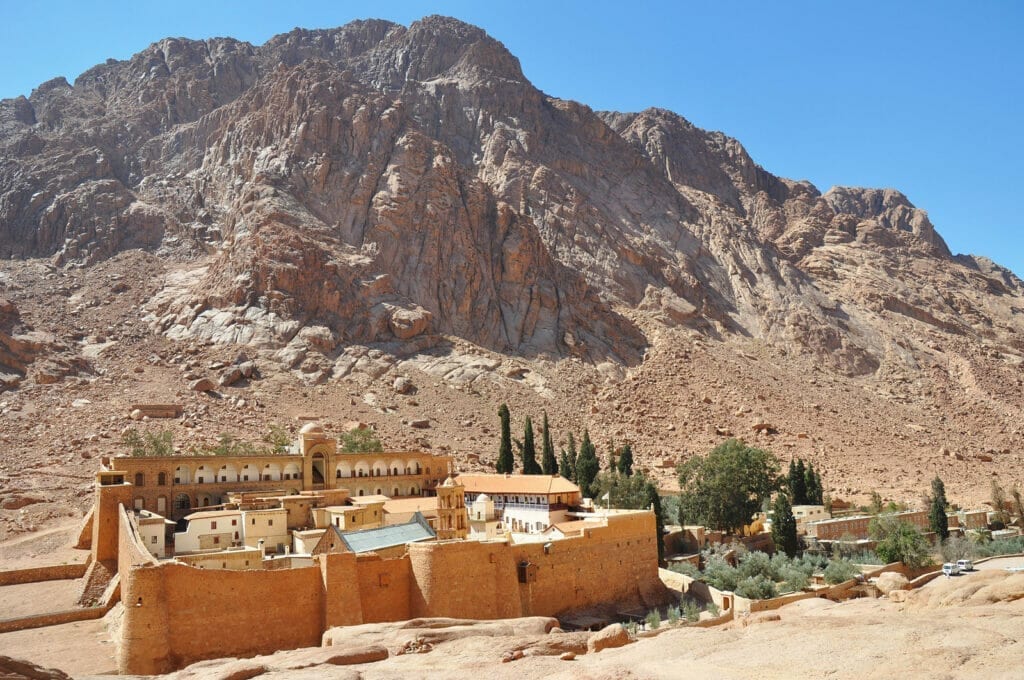 The Burning Bush of Moses

Would you ever imagine that the Burning Bush of Moses’ time would still be around today?  If you visit Saint Catherine Monastery , formally known as the Sacred Monastery of the God-Trodden Mount Sinai, you will see what is believed to be the Burning Bush.  When I visited Saint Catherine’s Monastery at the base of Mount Sinai on the Sinai Peninsula in Egypt, what I saw surprised me.  This bush was big, and the tour explained that there was no trunk.  Interesting…  Some kind of fencing held up the bush , and we were actually able to walk under it.  There is no other plant that resembles this one anywhere in the area.

Beside the Bush, Saint Catherine Monastery has a very rich history and is a UNESCO World Heritage Site.  Built between 548 and 565 AD the monastery is the oldest continuously operating monastery and can be traced back for over seventeen centuries.  It has preserved its Greek and Roman heritage and continues to embrace that heritage today.  They dedicated the monastery to Moses and Elias as they both came to Mount Sinai and spoke with Christ there.  There are also more than 170 Sinai saints honored by the church including the martyred St. Catherine.

Who is Saint Catherine?

St. Catherine of Alexandria was a Christian saint and pagan emperor Maxentius murdered her.  She was a princess and scholar who became a Christian at the age of 14.  At one point she went to Maxentius to rebuke him for his cruel ways.  He brought pagan philosophers to dispute with her, but she won the debate.  She converted hundreds of people to Christianity (including some of those philosophers), but she was eventually martyred at age 18.  Maxentius tried to kill her using a spiked breaking wheel, but when that was unsuccessful, turned to a beheading.  Her remains were miraculously placed at the monastery.  Incidentally, Joan of Arc identified Catherine as one of the Saints who appeared to her and counselled her, and those in the Catholic faith revere her as one of the Fourteen Holy Helpers.

In addition, St. Catherine’s has one of the earliest and still operational libraries in the world.  The library preserves the second largest collection of the early codices and manuscripts worldwide.  Only the Vatican Library holds more.  Some of the books include the Syriac Sinaiticus and, until 1859, the Codex Sinaiticus (oldest almost completely preserved manuscript of the Bible).

If art interests you, Saint Catherine Monastery is also replete with wonderful mosaics, an amazing collection of early icons, and wonderful church buildings.  It retains over 120 icons created in the Crusader art style and is the largest collection in existence.  It is amazing.

You may add few days to any of EGYPT FOR AMERICANS’ tour packages to visit Saint Catherine Monastery, the Burning Bush of Moses, climb Mount Sinai and enjoy Sharm El Sheikh (the best resort town on the Red Sea).