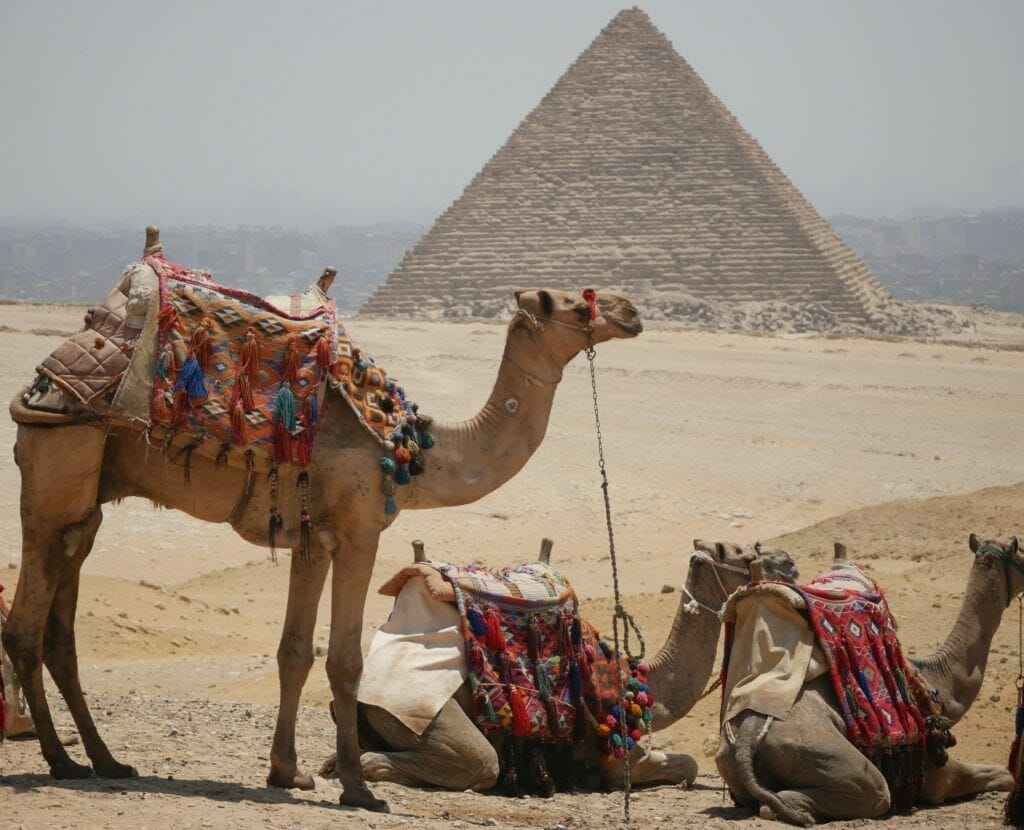 We, a group of American Teachers, took a tour of the Egyptian Pyramids and Sphinx, a camel ride, and learned the process of making papyrus from scratch. Here is how a full day at the pyramids was for American tourists…

Majestic…that’s how I would describe the pyramids. You honestly can’t imagine the magnitude of them, until you are really close to them.  Imagine for a moment that you are sitting at the foot of the tallest man made structure.  No, they aren’t the tallest now, but the Great Pyramid held the record—for thousands of years—the tallest man made structure in the world.  The rocks that form the pyramids are at times 3-4 feet tall and 5 feet long.  They are heavy.  I can’t imagine being a part of a team that moved one stone—much less all of them—to create a tomb for the ancient pharaohs.

Our Egypt For Americans’ Egyptologist

Gaber, our EGYPT FOR AMERICANS’ Egyptologist Tour Guide, took us on a tour.  Gaber is well-known in the Pyramids area, and he was the director of the entire area.  He says there was even a time, when he had permission to climb to the top of the Great Pyramid.  I asked him what it was like, and he said he was able to see the whole city of Cairo with the people looking like little specks on the ground.  I’d had loved the opportunity to have climbed the pyramids once in my lifetime.  Wow!  (Just to make it clear…climbing the pyramids is forbidden now.)

Reading a story from the Pyramids for our American Students

We wanted to read a story from the pyramids for our students in America.  It was a great time reading a book, but the wind was so strong that it kept our voices from being clearly heard.  We will work on our filming skills and will present our story to the kids soon.  It should be quite exciting!

Our time at the Pyramids was extensive.  With Gaber as our guide, we were able to walk on all sides of the pyramid.  In fact, a work is done on one of the pharaoh’s boat. Ancient Egyptians used to bury them in the pyramids with the pharaohs.  Gaber took us through the fence (off limits area) past the area where they were working.  The restoration process is occurring within a building, and I’m excited to see its completion someday soon.  While we didn’t go inside to see the boat, we saw the cavity where the boat was found.

As we continued on our tour, we decided to go into one of the queen’s pyramids.  It is located on the same property.  One of the things I learned is that the queens were responsible for funding their own pyramids.  They were much smaller than the pharaoh’s pyramid, but the descent was still steep.  We had some rather small areas to climb through until we eventually made it into the chamber.  There’s  not much to see in the form or pictures or hieroglyphs, but the journey itself is very interesting.  It’s hard to imagine how all of the workers made their way into the shaft without much light.

Gaber’s cousin took us to another tomb.  In this tomb we were able to see and hold an ancient skull.  I’m always amazed at how easy it is to handle artifacts in Egypt.  I guess they know the items have lasted for thousands and thousands of years, so they don’t mind a few extra hands on them.

Camel Ride at the Pyramids

Next stop…camel riding at the Pyramids.  Our team took Charlie Brown, Casanova, and Michael Jackson out for a spin.  These are the names of our camels.  Our camel driver Abdullah was wonderful.  He took us to a nice spot for pictures and led us back to the camel village.  The camels all had a lead, and the leads all hooked on to the camel in front of us.  It made it easier for the camels to stay together. Locals seem pretty happy to see American tourists tour the pyramids and Egypt.

On our way out of the complex we made a quick stop at the Sphinx.   While there, we took the traditional kiss photo.  Many people have said that Napoleon was the one to have knocked off the nose of the Sphinx. However, Gaber let us know that a Saem El Daher, a muslim leader, grew quite concerned that the people were worshiping the Sphinx asking for a good husband or the ability to have children.  As a result, he decided to start tearing down the Sphinx…starting with his nose.  As the destruction continued, a terrible storm came upon the work and halted the efforts.  Saem El Daher never picked it up again, so the nose-less Sphinx remains today.  I think the world can be happy his plan to destroy the Sphinx never came to fruition.

Sadly, it was time for us to leave the Pyramids plateau.  As we made our way out of the pyramids complex, we stopped by a papyrus factory.  We received a welcome drink of hibiscus and listened to a lesson on how they make Papyrus.

They slice the papyrus plant into long and flat pieces and then place the slices of papyrus in water for two weeks to make it malleable .  Actually, they determine the color of the papyrus by the length of time they leave it in the water.  More time means darker colors.  At any rate, they then lay the papyrus in a woven pattern.  It then goes into a press (long ago placed under rocks) and remains there for two weeks.  After this entire process, the papyrus is ready for writing.  The store had some amazing painted papyrus, and they even have ones that will glow in the dark.  It was worth a visit just to see how the process for papyrus making occurred.

Egyptian Lunch by the Egyptian Pyramids

We were definitely hungry, so lunch was a medley of foods.  There was tahini, baba ganoush, kofta, chicken, pigeon, and a variety of other salads.  We enjoyed our time talking with Gaber about many things typical to Egyptians—what do they cook and how does school work. It was a great time to relax and enjoy a little down time before our drive to Memphis and then Saqqara. We definitely recommend this tour to any American visiting the Egyptian Pyramids.