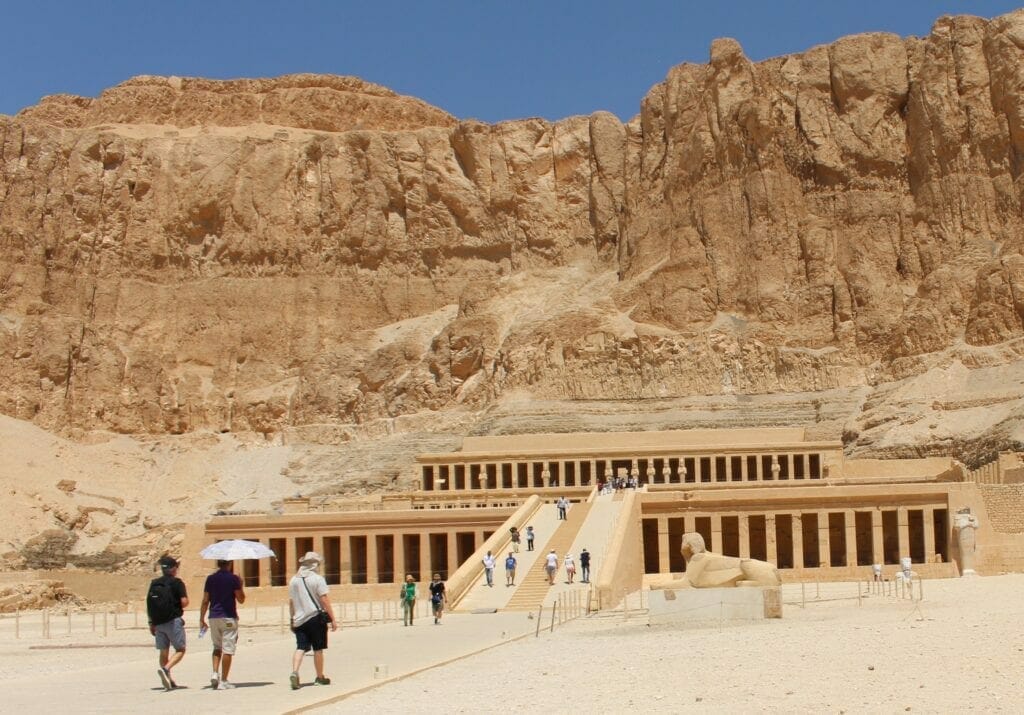 One of the easiest, modern and funniest ways to pronounce her name is hot-chicken-soup 😊. We will explain who is Queen Hatshepsut (the Most Powerful Woman in Ancient Egypt) and tour her beautiful Mortuary Temple-known as Deir El Bahari Temple- on the west bank of Luxor in Egypt.

Hatshepsut’s Path to The throne of Egypt

Hatshepsut was quite the lady and the most powerful woman in Ancient Egypt. Her father was Thutmose I, and her mother was his primary wife Ahmose. Obviously many pharaohs had multiple wives as did Thutmose I, for his son–and Hatshepsut’s husband/half-brother–Thutmose II. He was born to Thutmose I’s secondary wife Mutnofret. According to many scholars Hatshepsut believed she was designated by Thutmose I to become pharaoh, because she was the only heir to Thutmose I and his primary wife. Some believe Hatshepsut ascended to the throne immediately while others believe Thutmose II was the first to ascend to pharaoh. Once he died in his early 30s she became regent and ruler, while Egypt waited for Thutmose II’s son (not Hatshepsut’s–by the way), Thutmose III, to grow old enough to take the throne.

During the time of her reign, Hatshepsut became a great leader who allowed Egypt to prosper. She was able to increase the wealth of the Eighteenth Dynasty by reopening trade routes. One place she traveled was to the land of Punt. We don’t know where it is now (some say Ethiopia or Eritrea), but records show trading with Punt was great. Frankincense and myrrh were two goods that were received from the land of Punt. Frankincense was ground into a product called kohl and used for eyeliner. Myrrh trees were also brought to Egypt, transplanted, and placed outside of Hatshepsut’s temple. Today there are still relics of these trees.

As with all rulers, Hatshepsut planned for her death. She had an architect, Senenmut, design her three leveled temple. The architect was so close to Hatshepsut (some even speculate he was romantically intertwined with her) that his likeness is even displayed within the temple. That is quite unique from all other funerary temples because architects were rarely depicted in the temples they designed and built.

To give you a sense of direction, Queen Hatshepsut’s Mortuary temple( Deir El Bahari Temple) is on the opposite side of the Valley of the Kings. If you tried (and were allowed), you could probably walk from one side to the other as the ancient Egyptians did. EGYPT FOR AMERICANS includes Hatshepsut Temple in all our tour packages in Luxor.

It took nearly fifteen years to complete and was built to resemble the temple of Mentuhotep II. Its site was chosen because it was considered sacred due to its connection with the goddess Hathor.

It was a courtyard and most likely filled with beautiful plants and trees (some from Punt). Many hieroglyphs were destroyed, but some paintings of Thutmose III still remain. In addition, one shows the ancient Egyptians transporting two obelisks down the Nile.

The walk up the colonnade to the second level is quite impressive. Once you get on the landing, you’ll be in the second courtyard and be able to see the temple in greater detail. To the left of the colonnade, there is a temple dedicated to the goddess Hathor. Her likeness is everywhere, and since she is the goddess who provides sustenance to the people, her likeness is adorned with cow’s ears. Other points of interest on the second level include the birth colonnade where Hatshepsut’s royal birth is depicted and the chapel for the Anubis, the Egyptian god of the afterlife. Finally, you can’t miss one of the temple’s unique distinctions, as Hatshepsut’s temple is one of the first pictorial representations of the trade expedition they took to Punt.

You must continue up the ramp to reach the third level. The colonnade along the front face of the temple’s third level has statues in front of them. Some of the statues had been missing everything except their feet. You take a peek of Amun’s Sanctuary as well as the Royal Cult Chapel and the Solar Cult Chapel. Previously, this area was under construction—for 55 years and now open for visitors!

When looking up at the cliff face where the sanctuary was carved, It is such breathtaking to view the entire scene from the top of Hatshepsut’s Deir El Bahari Mortuary temple. It is definitely the temple of the most powerful woman in Ancient Egypt.