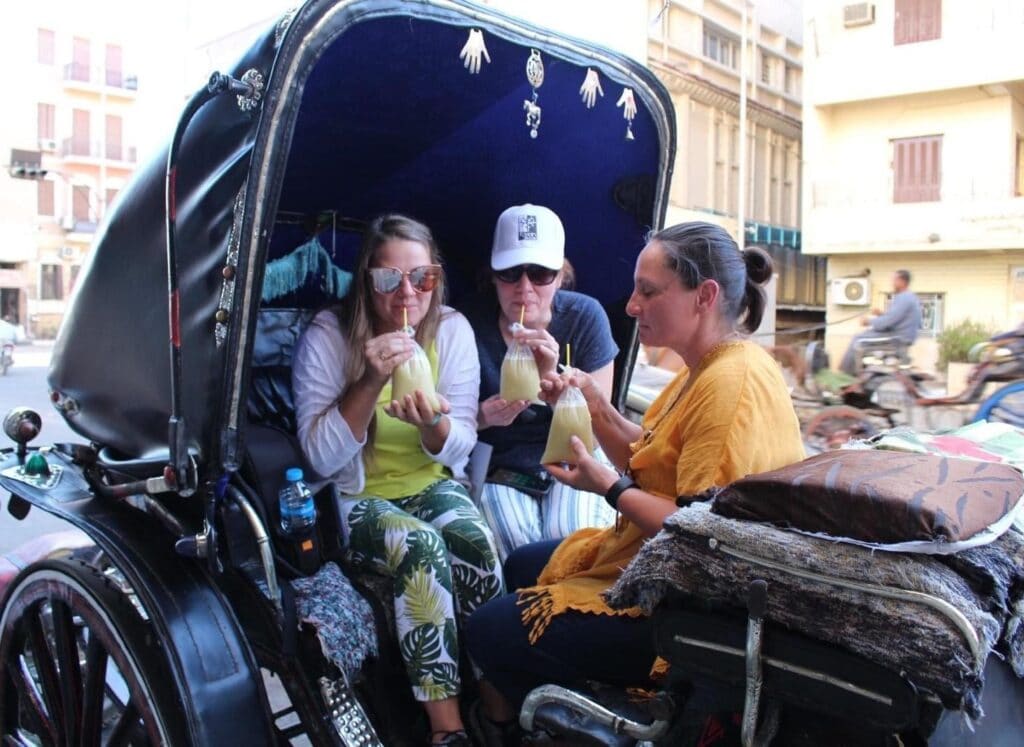 Okay, let’s talk fashion—women’s fashion(clothes to wear in Egypt).  Surely you’ve heard that women in Egypt cover up when they are out and about.  Maybe you’ve heard that their clothing is restrictive, and they only show their eyeballs and their hands.  It could be, that as a woman, female traveler and tourist, you might be concerned about your travel in Egypt.  Coming from a non-Egyptian, non-Muslim woman, I want to assure you that there is no particular dress code for female traveler or tourist in Egypt.  However there is no specific dress code for female traveler or tourist in Egypt, I still want to explain and suggest a few things for your consideration.

Egypt is different from the USA, but very modest

First and foremost, remember you are heading to another country.  Not only is it a different country, but the language and the predominant religion is not part of mainstream America.    Therefore, when you enter Egypt, you might notice an increased use of scarf or head covering and minority wearing Niqab (covering the face).  Generally, men and women will be more modest in what they wear.  However, you will also notice women who don’t have either a scarf or Niqab.  This could mean these women are non-Muslims( 10-15 % of Egypt Population are Christians), but it could also mean these women are more relaxed with their religion.  In other words, there is not one way that women in Egypt express their Muslim beliefs.

What women wear and do not wear in Egypt? Also varies by your location.

Traditionally, Egyptian women try to dress modestly.  As for clothes not to wear in Egypt especially outside of tourist destinations, you will likely not see women wearing shorts (especially short shorts), and it is quite possible the women will not expose cleavage or wear tight fitting clothing.  Generally, women in Egypt will wear long sleeved shirts and pants or long skirts. This will also vary based on where you are in Egypt. It is more modern in the big cities, while it tends to be more traditional when you move to small cities, towns and villages.

When you move toward the resort areas like Sharm el Sheikh, Hurghada, or even in the tourist destinations and sights; things and clothes to wear in this part of Egypt will definitely be much more relaxed.  Sure, you will still see women dressing modestly.  They might even have a full body suit for swimming.  However, these locations are much more laid back.  You will see female travelers, tourists and locals in all manner of clothing.   It would certainly be more common to see women wearing more breezy skirts and blouses.

A guide for the American female traveler to Egypt

The point is, as a female traveler or tourist in Egypt just be mindful of the culture you are visiting.  If possible, avoid tight fitting clothes that expose your cleavage.  Try to keep shorts to the resort and tourist areas, and—no matter where you are—if you are wearing something that falls at the knee, or you even have on short sleeved shirts, no one will make a fuss.