Your affordable Egypt land adventure tour package begins in Cairo by visiting the last remaining Wonder of the Ancient World--the Pyramids of Giza.  We spend time with Egyptian artifacts at the world famous Cairo Museum. Then take the Overnight Sleeper Train to Luxor where we will visit ancient temples, necropolises, and the Valley of the Kings.  As we take some time enjoying the landscape, we drive toward Aswan--home to the Philae Temple and the beautiful Nile River.  Once we've enjoyed our trip to Upper Egypt, we will return to Cairo on the Overnight Sleeper Train for a final adventure of this amazing and Budget Group 7 days Egypt tour package with EGYPT FOR AMERICANS.

You could also extend your stay in the region to explore Jordan, Jerusalem, Dubai and Abu Dhabi.

Explore Egypt's highlights in this seven day land adventure.  Your group begins in Cairo by visiting the last remaining Wonder of the Ancient World--the Pyramids of Giza.  We spend time with Egyptian artifacts at the world famous Cairo Museum. Then take the Overnight Sleeper Train to Luxor where we will visit ancient temples, necropolises, and the Valley of the Kings.  As we take some time enjoying the landscape, we drive toward Aswan--home to the Philae Temple and the beautiful River Nile.  Once we've enjoyed our trip to Upper Egypt, we will return to Cairo by the Overnight Sleeper Train. 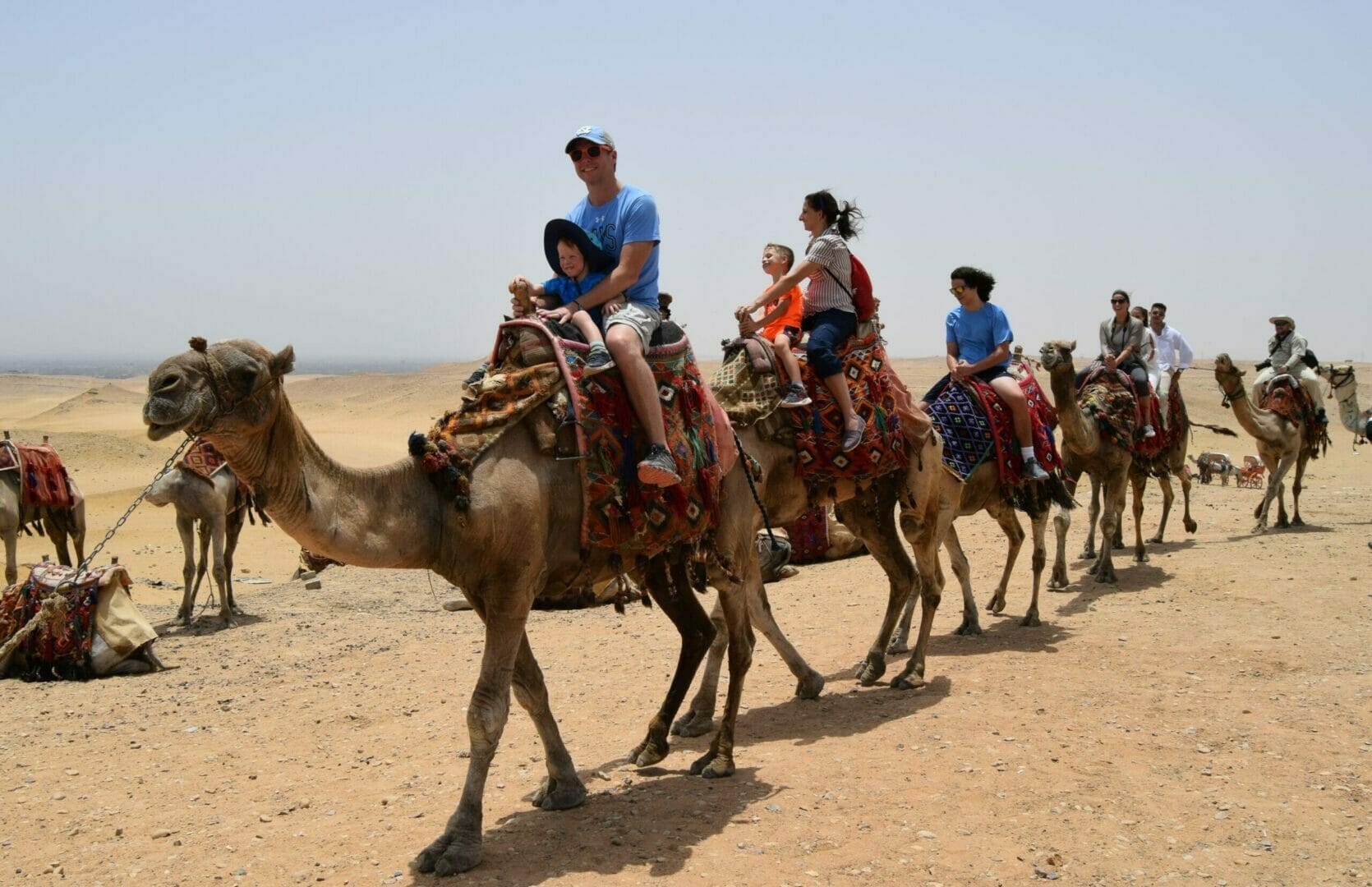 Day 2 - The Great Pyramids of Giza, the Egyptian Museum, and Overnight on the Sleeper Train to Luxor.

After eating breakfast at your hotel, you will be met by the Egyptologist who will provide your full day of touring. The adventure begins west of the Nile River in a town called Giza. It is here you will witness Egypt’s most visited attractions—the Pyramids at Giza and the Great Sphinx. Built for three kings of the Fourth Dynasty, the pyramids were designed to be the tombs of Khufu, Khafre, and Menkaure. In addition to the three main pyramids, you will see the queens pyramids and the Great Sphinx.

The next stop for today will be the Egyptian Museum. This museum houses over 120,000 artifacts from Egyptian history. Some of their most famous include the entire collection of Tutankhamen. Your guide will introduce some of the many important pieces as well as allow you some time to wander through the museum to peruse the collections. Once we finish with the museum, we will head to Abu Tarek for lunch. Abu Tarek is a multi-story restaurant that serves wonderful Koshary. It is definitely a special Egyptian treat.

After you have explored the splendors of the day, your driver will return to your hotel, and you will be at leisure for the evening. We will then go the train station to catch the overnight sleeper train to Luxor. Overnight on the train. Meals included: breakfast, lunch during tour, and dinner on the train.

Today the train will arrive in Luxor, the site of the famous Thebes and the World’s Largest Outdoor Museum. Whereas Egypt holds thirty percent of the world’s antiquities, Luxor holds seventy percent of Egypt’s antiquities. The importance of this city in Egypt’s history is unparalleled. Upon arrival to Luxor we will begin our day of touring in the west bank where we will start with the Valley of the Kings. After pyramid building began to wane, the kings still needed a final resting place to preserve themselves and store all their treasures. Housing nearly all the tombs for the kings of the 18th, 19th, and 20th dynasties, the Valley of the Kings was designed to help hide the burial places of the kings to prevent looting. One of the most famous tombs here is the tomb of Tutankhamen. We will have the opportunity to explore some of the tombs.

Next, we move to the Mortuary Temple of Hatshepsut. Hatshepsut was the wife to Thutmose II but became pharaoh after he died. This mortuary temple was modeled after Mentuhotep’s but at a much larger scale. We will explore this beautiful temple which is set into the cliffs at Deir el-Bahari. Our last site on the west bank of Luxor to visit will be the Colossi of Memnon where you will see two (nearly 60 feet tall) seated statues of Amenhotep III. These statues were once the entrance to Amenhotep’s mortuary temple.
As our morning tour concludes, we head to lunch at a local restaurant. Once finished we travel to our hotel where we can check-in and relax before our afternoon tour of the East Bank continues.

The East Bank is filled with more sites to see. It is where we will find the Karnak and Luxor temples. The Karnak temple, also known as the Temple of Amun-Ra, honored not only Amun-Ra but Osiris, Montu, Isis, Ptah, and other Egyptian rulers. The area of Karnak Temple is around 200 acres, so it is immense. In fact, the debate is still on as to whether it or Angor Wat (in Cambodia) is the largest temple. As we leave Karnak, we will begin our trip to the Luxor temple. At one time there were sphinxes that lined a path from Karnak to Luxor, but it is not fully excavated. You will, however see a portion of the sphinx as it leads to the Luxor temple. Luxor temple is one of the most intact temples, so you will see many interesting statues, hieroglyphs, and rooms.

Our tour for the day concludes as we head back to our hotel for a relaxing evening. Meals included: breakfast on the train, lunch during tour.

Today we will enjoy breakfast before we begin our expedition to Aswan. Along the way we will enjoy the scenery and farming life in upper Egypt. Our drive continues until we reach Aswan. Aswan, located in southern Egypt, has served as the southernmost city in Egypt and is the third largest city in Egypt today. Once we arrive Aswan, we begin our touring at the Aswan High Dam. The High Dam was built between 1960 and 1970 to help control Nile flooding, provide water storage for irrigation, and to bring electricity to the people of Egypt. Prior to the High Dam being built, the Aswan Low Dam served to provide similar effects to the Nile River. Today the High Dam protects the Nile basin from flooding and droughts while providing jobs for many Egyptian people.

We then continue to Philae temple, one dedicated to Isis, the wife of Osiris and mother to Horus. It, too, was moved from its original location to one that was free from flooding. To get to the Philae temple you will take a water taxi. We will end our Aswan touring day with a felucca for a relaxing boat ride through Aswan. You will have the opportunity to not only enjoy the scenery but also to catch a glimpse of the Nubian village.

Overnight in Aswan. Meals included: breakfast at the hotel and lunch during tour

Day 5 - Free At Leisure or [Optional Day Tour to Abu Simbel]. Overnight on the Sleeper Train to Cairo.

Today, you choose between relax and enjoy Aswan or join the DAY TOUR TO ABU SIMBEL for a supplement of only $110 per person. Abu Simbel is not only an amazing site built for Ramses II and his wife Nefertari, but it also presents the amazing feat of ingenuity. In the 1960s the Egyptian government began construction on Aswan High Dam. Its purpose was to prevent the annual flooding of the Nile River and to bring electricity to all people of Egypt. The trouble with the High Dam was it would permanently flood many of the antiquities. As a result, massive projects were begun to help preserve these sites. Abu Simbel was one of them. Over the course of several years, Abu Simbel was cut apart and reconstructed on a higher plane, so visitors would still be able to stand in awe of ancient Egyptian ingenuity.

Later tonight, you will be transferred to Aswan train station to catch the overnight sleeper train back to Cairo. Meals included: breakfast at the hotel and dinner on the train.

Today we arrive at Cairo train station and you will then be transferred to your hotel. Meals included: breakfast on the train

Today will be the final day of our tour of the amazing Egypt, and we will take you back to Cairo International Airport to catch your flight Thank you for spending the time with us. Meals included: breakfast at the hotel 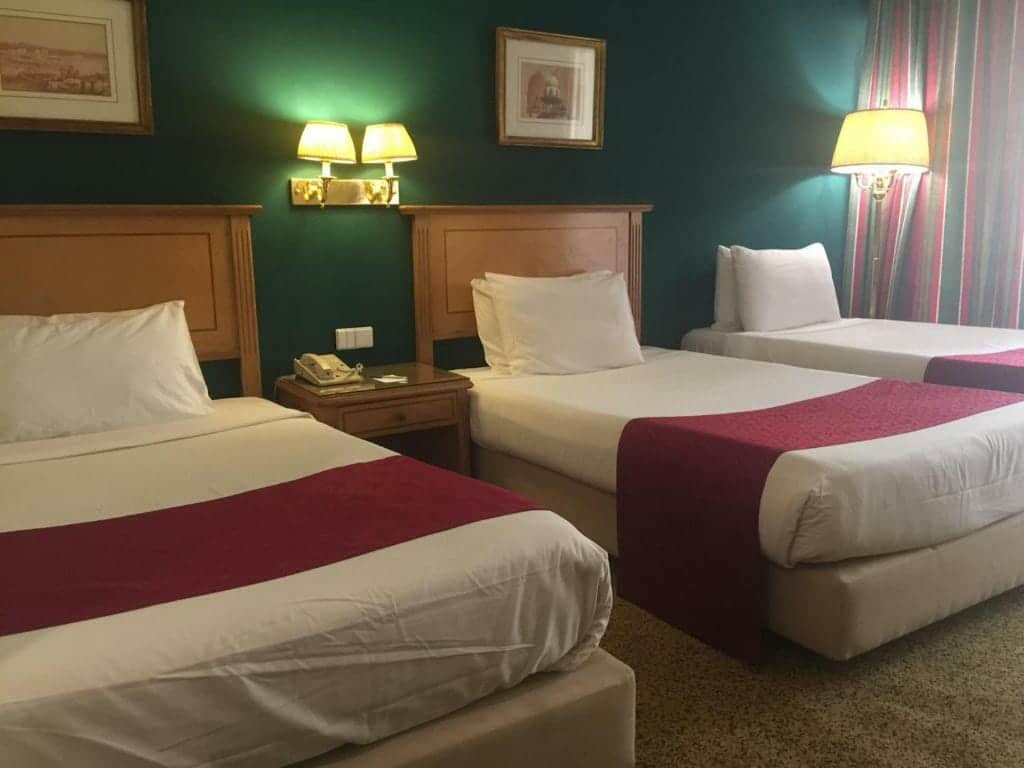 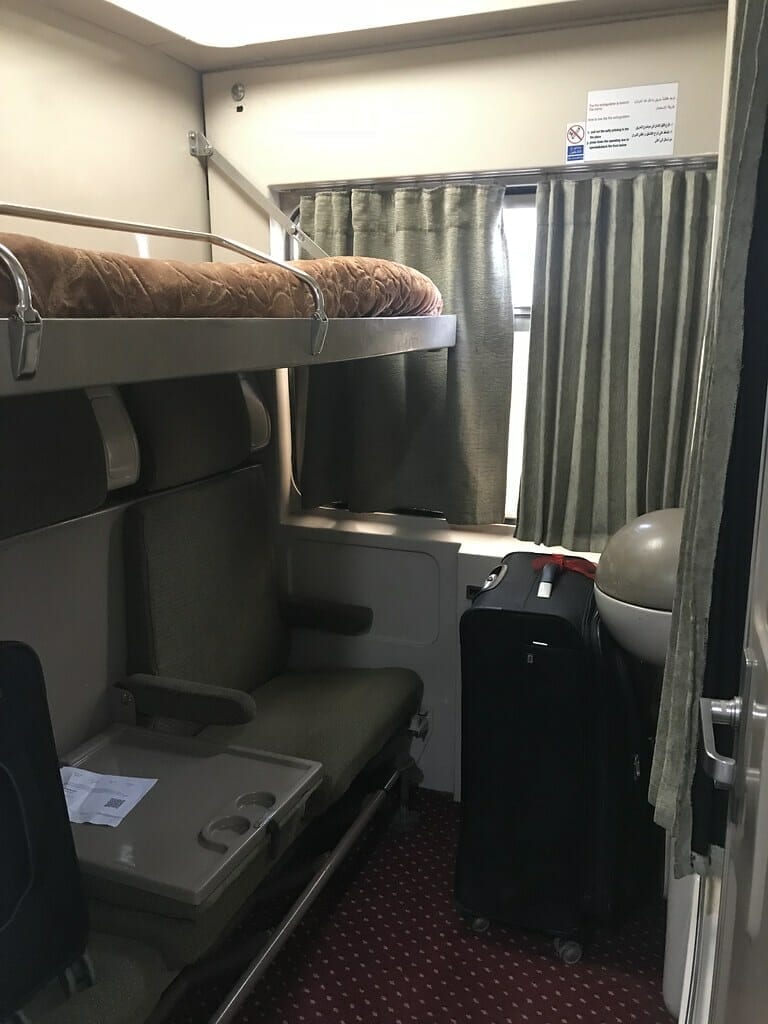 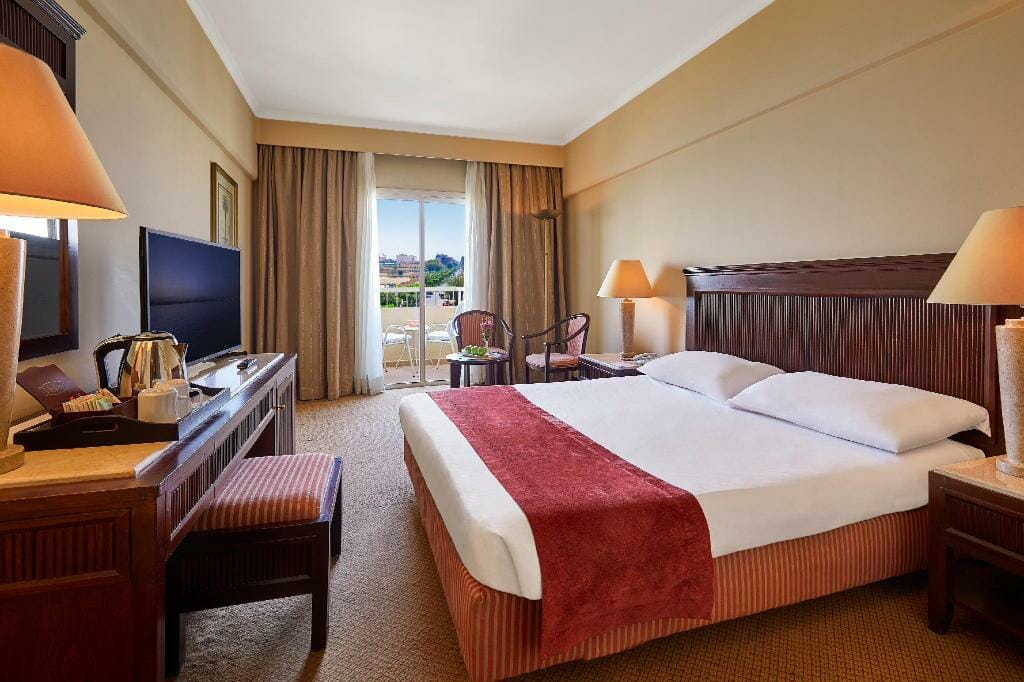 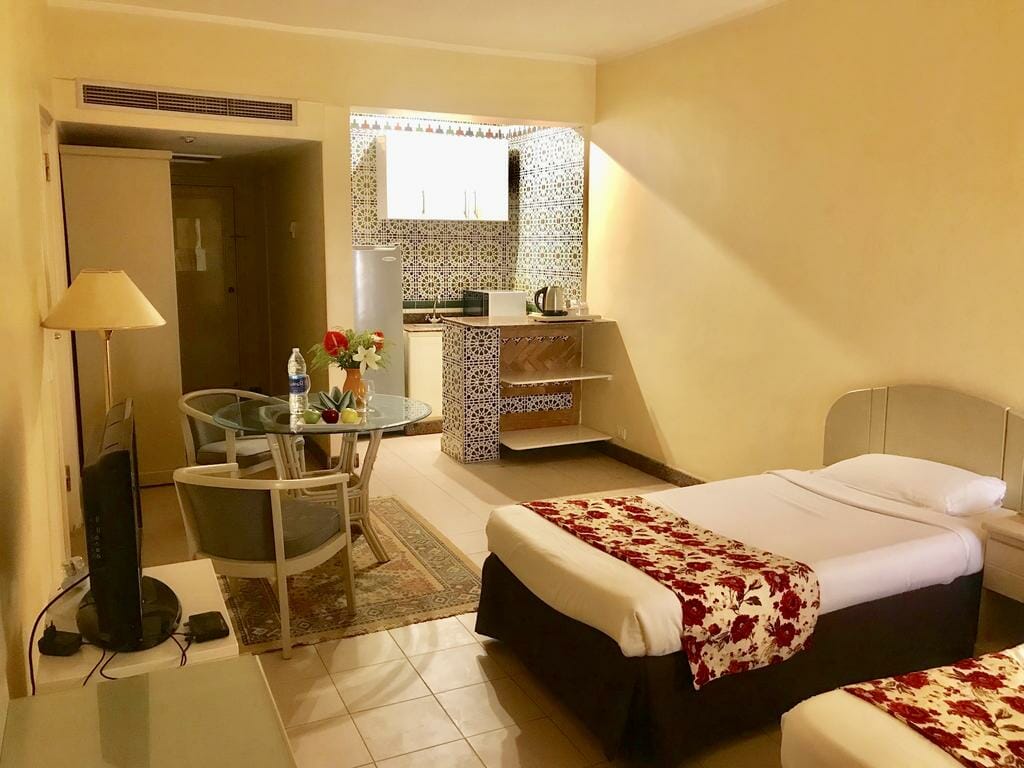 Prices are quoted in US Dollars per adult per tour package and valid only for the tour dates shown above. Single supplement is ONLY to be added to the per adult rate, when you choose to have your own single room.

Reservations should be made as early as possible to book the desired holiday. Space on a given tour will be secured upon receipt a deposit of 25% of the full price. This deposit will be 50% during the Christmas, New Year and Easter holidays . This deposit counts as part of your final payment. Deposits can be made by bank wire transfer, Cash, Personal or Bank Check, or paid using a credit or debit card (Visa, MasterCard, Discover or American Express). Deposit must be received within 3 days of booking. Full payment is due not later than 90 days prior to the tour start date.