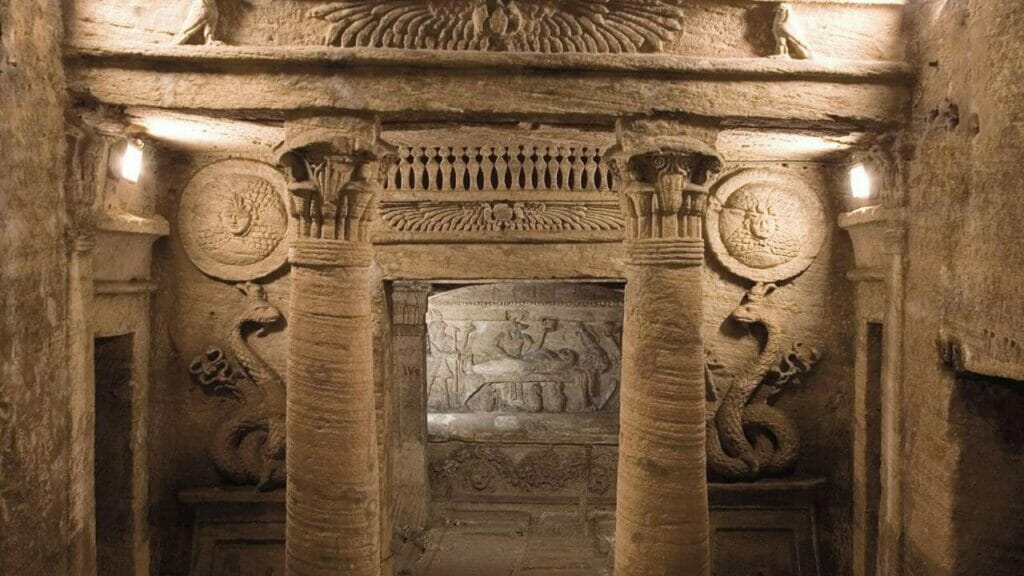 One day in 1900, a man was maneuvering his donkey-drawn cart down the road.  As he did, he received quite a shock when his cart fell into a pit. This unforeseen accident led others to an astounding archaeological find—the Catacombs of Kom El Shoqafa.

The Catacombs were likely a private family cemetery during its inception. But It eventually expanded and converted to a public cemetery.  The cemetery dates back to the first century CE. It was actively used until around the 4th century CE.  Its style is quite the mix. It houses Greco-Roman with Hellenistic, Pharaonic, and ancient Egyptian art.  All of these elements were common during this period in Alexandria (a.k.a. the Athens of Egypt).

The Catacombs have spent many years under water. The second level is now accessible to the public, and the third level is still submerged.  As you descend a spiral staircase, you reach a point where you can see where the water line once remained.  Now well-lit, it is a vast space to explore and enjoy.

The spiral staircase has 99 steps that were used to lower the bodies of the deceased by ropes.  There were slits cut into the sides of the shaft that allowed light through the staircase to let visitors see more easily.  You enter a vestibule with niches on two sides.  You should then see the seating that visitors used to take a rest after descending the stairs into the tomb.

The reason why we call it Kom El Shoqafa or the pile of shards.

The vestibule leads to the rotunda, which leads to a parapet (a dome supported by six pillars).  Beside the rotunda, there is another vestibule that leads into a chamber called the Triclinium.  This was likely the place where visitors would have dined.  Incidentally, the name Kom El Shoqafa means the pile of shards.  The visitors used to leave their containers when done eating which explained the many clay pieces of pottery found in this place. That’s why they called it Kom El Shoqafa or the pile of shards.

As you wander through the catacombs, you will encounter several sarcophagi as well as beautiful artistic decorations.  Medusa are drawings here are for the Falcon God Horus, Uraeaus the cobra, and other Egyptian and Greco-Roman artworks.  There is also a room where a case filled with different horse artifacts including bones.

Posted in Egypt, Get Inspired and tagged Alexandria, Alexandria Tour, Alexandria-Egypt, Catacombs, Egypt Tours For Americans, Greco-Roman Cemetery in Egypt, Kom El Shoqafa, Tour Alexandria
← The Mount of Temptation | Where Jesus was tempted by the devil during his 40 day and 40 night fast.Sheikh Zayed Grand Mosque | Abu Dhabi | UAE | The third place winner for Best Landmarks in the World →