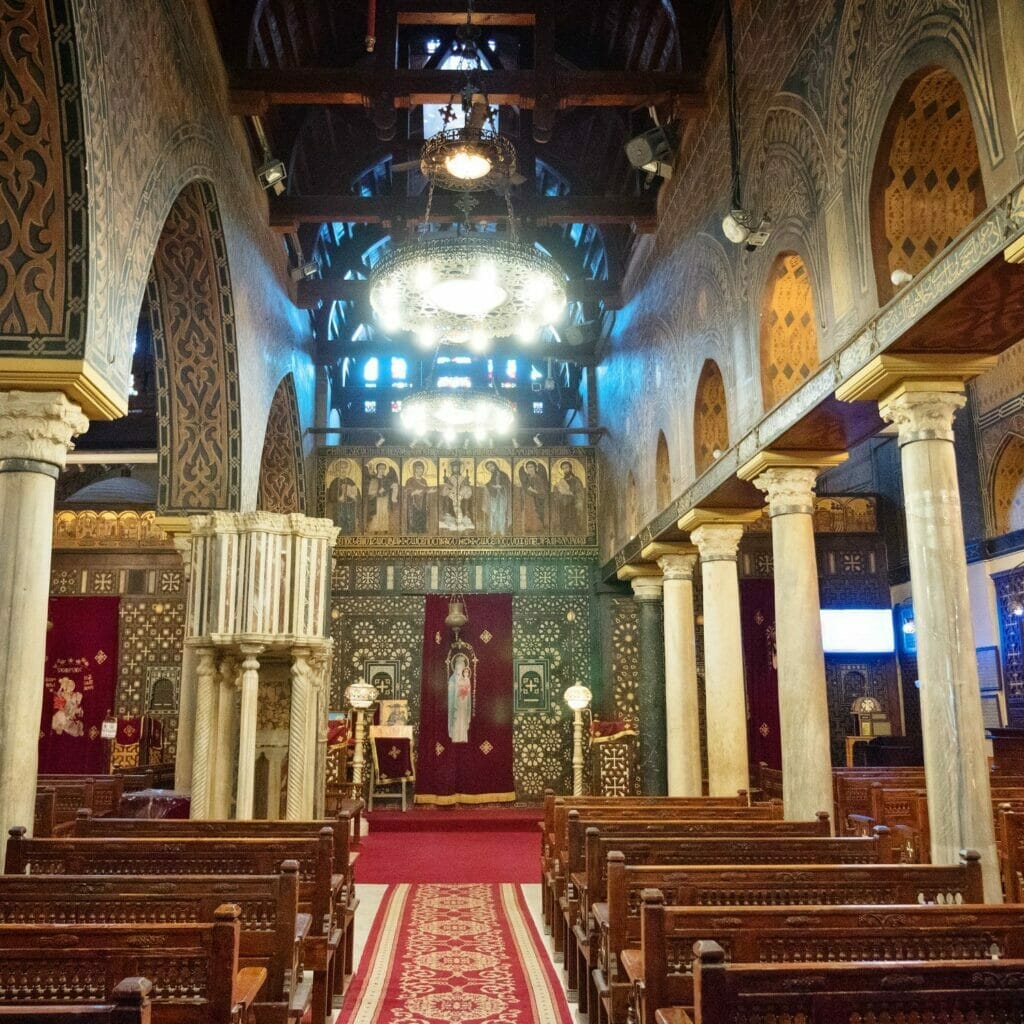 The Hanging Church or Saint Virgin Mary’s Coptic Orthodox Church is one of the oldest churches in Cairo, Egypt. It is located in Old Cairo, they built this Basilican-styled church atop a gatehouse of the Babylon Fortress. The name Hanging Church is because its suspended nave over a passageway, so it appears to be hanging in mid-air. Coptic Cairo Tour includes a visit to the Hanging Church.

A church in this location was originally built in the 3rd century prior to the construction of the Hanging Church in the 7th century.  Throughout history, the Hanging Church has been rebuilt many times and experienced great restoration efforts, most notably under the 10th century Pope Abraham.  In 1047 the Muslims conquered Egypt and moved the headquarters for the Coptic Church from Alexandria to Cairo.  The Hanging Church eventually became the official residence of the Coptic Orthodox Pope and continued into the present time.

The Hanging Church is significant for Coptic Christians.  First and foremost, there have been several reported visions of the Virgin Mary.  One vision occurred when she appeared to Pope Abraham who needed to prove his faith to the ruling caliph, al-Muizz. Al-Muizz asked Abraham to show his faith like unto a mustard seed and move Mokattam Mountain.  As Abraham prayed for guidance, Mary appeared and told him to seek out Simon the Tanner who would give him the power to perform the miracle.  Abraham found Simon, uttered the words given to him, and moved the mountain.  Today the church is actively providing worshipful services and activities for all Coptic Christians.

To enter the church, you will first pass an iron gate which leads to a courtyard filled with beautiful mosaics.  As you ascend 29 steps, you will find intricate wooden doors that open into the church. They dedicated three of the sanctuaries inside this church to the Virgin Mary, St. George, and John the Baptist.  In addition, they built the ceiling with vaulted timber to resemble the Noah’s Ark.  The pulpit and the thirteen pillars supporting it are marble.  One represents Christ, and the others represent the 12 disciples.  The pillars are not all the same however.  One pillar is black, representing Judas’ betrayal, and another is gray, representing Thomas’ doubt of Christ’s resurrection.

110 Icons in the Hanging Church

The church has 110 religious icons that adorn the walls of the church.  They call the oldest icon within the church also known as Saint Virgin Mary’s Coptic Orthodox Church, the “Coptic Mona Lisa”.  It dates back to the 8th century AD and represents the Virgin Mary, Jesus Christ, and John the Baptist.  Other icons include fifteen that describe the life and torture of St. George, seven that give insight into John the Baptist’s life, and one of St Mark, the first Patriarch of the Coptic Orthodox Church. The Hanging Church is a beautiful church with a rich heritage.  Should you find yourself in a Coptic Cairo Tour, it is definitely worth a visit.

Posted in Coptic Cairo, Coptic Egypt, Egypt, Egypt Tours, Get Inspired, Must See In Egypt, Tours in Egypt, What to do & visit in Cairo? and tagged Christianity in Egypt, Churches and Monasteries in Egypt, Egypt For Americans, Egypt Is Safe, Egypt Tours For Americans, Must See In Egypt, The Cairo Hanging Church, The Hanging Church
← 6 Things to prepare for your next overseas trip from USAAmerican Teachers Making Papyrus at the Egyptian Pyramids →