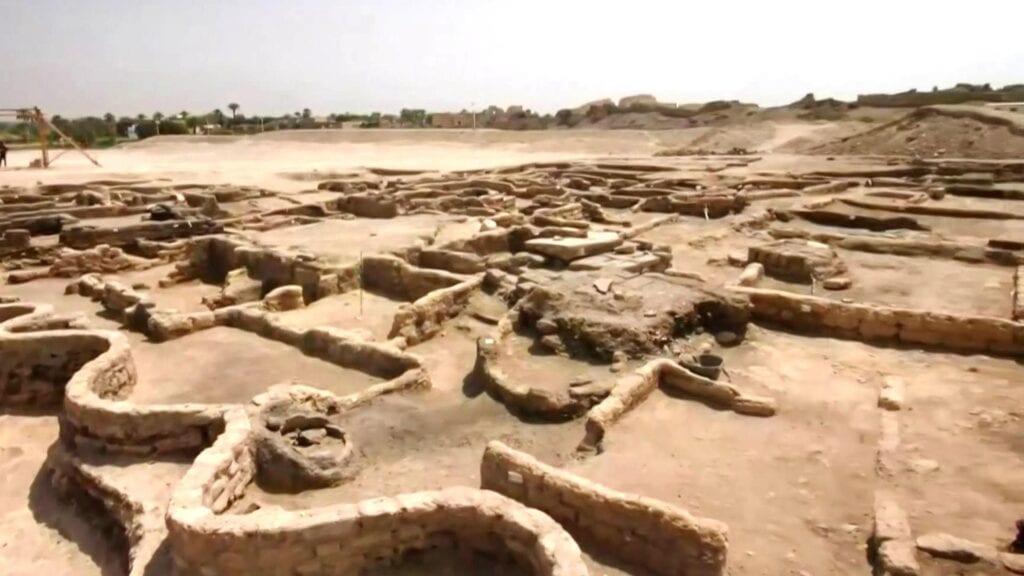 I want to tell you about a city that has just recently been unearthed in Egypt. This city, dubbed “The Lost Golden City”, is likely the second most important archaeological find in Egypt after the discovery of Tutankhamen’s tomb of 1922 in Luxor.

The leader of this discovery is none other than Egypt’s renowned archaeologist Zahi Hawass.  His team found this city in September 2020, but it took until April 2021 for them to reveal it to the world.  According to Hawass, “The Lost Golden City” will share its story about the life of the people during the Golden Age.  It will make clear many of the questions we have had about ancient Egyptian life.

Let’s go back to the reign of Amenhotep III.  He ruled with great power from 1391 to 1353 BC.  During this time the people prospered.  As evidenced in The Golden City, rings, scarabs, colored pottery, amulets and bricks with the seal of Amenhotep III are spread throughout the city.  There’s a bakery, an administrative district, items related to metal and glass production, and a residential area within the city.  The streets, bordered with a zig zag wall help to separate three distinct districts, all of which have their own entrance.

Amenhotep III had a son, Amenhotep IV.  This son reigned alongside his father but eventually changed the course of history once his father died.  He changed his name to Akhenaten and began to worship the sun god Aten.  Akhenaten also abandoned the city and moved the capital to Amarna.  It is believed the Lost City was reused by Tutankhamen, Akhenaten’s son and successor, as well as Ay, the man to inherit the throne after marrying Tutankhamen’s widow.  The amount of use by Amenhotep III’s successors remains unseen.

As you walk along the streets of the city, you can find artifact after artifact.  One artifact, a vessel containing approximately twenty two pounds of boiled/dried meat, came with an inscription.  “That Year 37, dressed meat for the third Heb Sed festival from the slaughterhouse of the stockyard of Kha made by the butcher luwy.”  This inscription that names two people who lived and worked in the city confirms the city was active during Amenhotep III’s reign alongside his son Akhenaten.

Other intriguing finds include remains of a potential inhabitant of the “Lost Golden City” and two unusual burials of a cow or bull found inside a room.  Archaeologists will keep busy investigating the nature and purpose of these burials.

The size of the city is still a mystery, but its time in history is not.  However, Hawass believes with this archaeological find in Luxor Egypt they have just scratched the surface of this city…that much, much more will be found.  What might they find?  Well, Hawass “expects to uncover untouched tombs filled with treasures”.  This and more leaves me with great expectations for a fabulous new find.