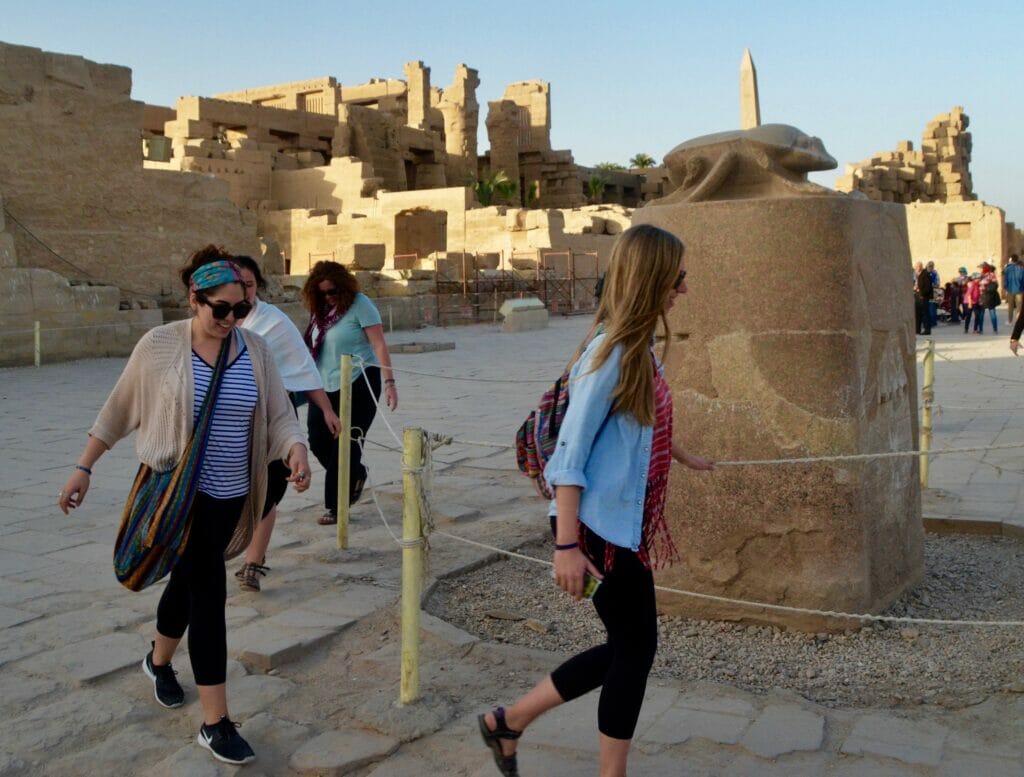 When I was a little girl, my mom had this bracelet that always caught my attention.  She called it a scarab bracelet, and it had many different colored rocks that were etched and encircled by gold.  Each of the encircled stones were connected to one another, forming the bracelet.  I loved that bracelet because it was so colorful, and as a young girl, I thought it was so ritzy.  I haven’t seen the bracelet for years, but when I went to Egypt, I discovered the scarab beetle in Ancient Egypt was more than just a cool piece included in beautiful jewelry.  The scarab was scary to the ancient Egyptians.  I found this one of the quite unusual Ancient Egypt facts—a scarab, or dung, beetle was sacred?  How?  Why? however the Scarab statue in Karnak Temple is believed to bring luck when you walk like an Egyptian : ) around it.

What the Scarab meant in Ancient Egypt?

First, let’s understand what the beetle does. Ancient Egyptians symbolized God Khepri by a sacred scarab beetle.  A beetle creates a mud ball and continues to roll that ball until it is larger than itself.  While it rolls the mud ball, it lays eggs inside.  Those eggs are protected from the weather by the mud that surrounds it, and the eggs are also surrounded by the nutrients it needs to grow.  Eventually, new life in the form of hatching larvae comes from the mud ball.  In ancient Egypt, farmers saw this process, and they reflected on the idea of rebirth—life coming from the earth.  In addition, they ascribed the same attributes to the god Kehpri.  Ancient Egyptians depicted him as a beetle who would roll the sun into the sky every morning.  And every morning became a new beginning ready for life to begin.

The scarab beetle was a part of every day life and became sacred.  If God Khepri didn’t roll the sun out across the sky, there would be no new days.  The scarab stretched beyond the idea of the sun; they began to use it for many things.  The Ancient Egyptians placed it in the ancient tombs to symbolize the idea of resurrection, or helping the deceased find their way to the afterlife. Ancient Egyptians turned Scarabs into amulets and inscribed with the names of pharaohs on the underside.  In addition They used them as a seal for official documents.  And, they wore scarabs for protection.  In all honesty, scarabs had a similar sentiment to the Egyptians that a cross has to Christians.  Although Scarabs in Ancient Egypt were scary, but they were incredibly important.

Walk Around the Scarab in Karnak Temple

In Our Tour Packages to Egypt we head into Karnak Temple to see so many amazing artifacts.  The one that we remember most is most definitely the large granite scarab beetle.  According to the tour guides, walking like an Egyptian : ) counter clockwise around the scarab beetle multiple times in succession will bring you luck.  The more times you walk around the scarab beetle, the greater the chance that something difficult in your life will be solved.